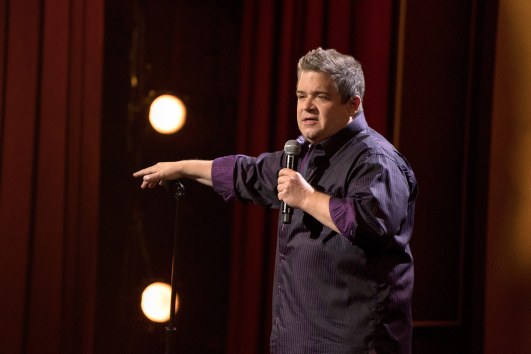 For a long time we’ve known that Patton would open up about the passing of his wife, Michelle Eileen McNamara in his new special. So while Patton hilariously brings up Trump and the state of US politics as you expect any decent comic to do, you know that ultimately he is building up to talking about the most difficult and painful period in his life.

Before I get into that portion of the show it’s important to stress that this is not just a great comedy special because it’s very very funny but it’s also great because it reminds us that life is full of contradictions, pain and that there is humor to be found even in those most difficult times.

The part of the show that Patton spends talking about Michelle and the experience he and their daughter experienced in the aftermath is real, vulnerable, difficult to watch and also extremely funny. Sometimes we see it as inappropriate to laugh in times of great grief and mourning or seriousness. It’s almost as if we see it as in someway disrespectful but that is as most of our own reaction to others’ grief, on us.

When Patton talks about the initial moments after finding out his wife had passed away and in the way he describes having to tell his young daughter that her mom is not here anymore, he gives us permission to laugh. We’re not laughing at the situation, we’re laughing at some of the absurdities that death and sorrow throw at us. This is extremely generous. Maybe Patton understands that being around someone who is grieving is extremely uncomfortable. This could be why we often try and break the tension by coming out with some cliched platitiudes.

Maybe laughing isn’t even the point. Maybe, being ok with allowing those who are grieving to experience whatever emotion they need or want to, is.

What Annihilation shows us more than anything perhaps, is that it’s ok to be completely sad, to be in the darkest time in your life but to also laugh. These are not mutually exclusive emotions. The purpose of finding humor may simply be because it gives us something positive to feel but it’s also something more than simply a coping mechanism. It’s a way of being real. Comedy gives us an outlet that doesn’t have to pretend to be ok to make someone else feel comfortable.

Comedy allows that thing that we’re all thinking to be very openly experienced rather than keeping it stuffed down. Pain needs an outlet and often it may just be that humor is the best release valve we have.

But that doesn’t mean it’s easy.

This is evident in Patton’s remark that a portion of the show where he interacts with the audience is more or less an attempt to avoid the inevitable. It’s almost as important to note here that Bobcat Goldthwaite’s direction is a major part of the delivery of this section. While it’s normal to pan to the audience to see their reaction to jokes, the majority of the focus is on Patton and the story he is telling.

It’s a really small detail, hardly even important, perhaps not even intentional but this is a raw story that Patton is describing and we certainly don’t need any help knowing how to react by watching the audience.

Hearing Patton describe how his daughter’s school advised him to “tell her in the sunshine” is just one example of parts of this story that will deeply move you. Listening as he describes attempting to bring some level of normalcy to their lives is heartbreaking. If you don’t know anything about Patton Oswalt or his comedy this is simply a man who has just lost his wife and is allowing us an insight in to what it is like to deal with grief and raising your daughter without the most important female presence in their life.

As Patton describes the initial days and weeks after, in the final section of the show he recalls a chance encounter with someone at an airport that will leave you mad, frustrated and laughing uncontrollably all at the same time. It’s Patton Oswalt at his best. Bringing us along in his imagination as he plays out a few hypothetical hilarious mental images that are just brilliant.

This story also demonstrates what is the most important part of the show for me and what it helps us understand about how to react to others’ grief. That is, sometimes the best thing is to not say anything at all. Earlier, as Patton wrestled with the idea that God may have had to choose which one of them to take, it reminded me of the countless times I’ve heard  people say completely the wrong thing as others have grieved.

These don’t serve any purpose other than allowing the person who says them to feel a little better. Grief and mourning is a horrible experience but it’s also very important that we are allowed to fully feel both. The initial aftermath of any difficult news like this, is certainly not the time to express our theological stance on God’s omnipresence or command over the Universe.

It’s the time to just sit and live in the ugliness with those who are grieving. To not offer answers to why but to provide help in the what.

But perhaps the most important message in the whole show is  from Michelle herself as Patton shares a simple yet profound piece of advice she had given him, that gives us just a tiny yet enormous glimpse into the kind of person that Patton and his daughter know and love.

It’s simplicity is it’s beauty. To many it might seem too idealistic or unrealistic but maybe what we all need now more than ever is to get back to the basics of being a decent human being. It offers a generous approach that in our Twitter obsessed and the Trumpesque volatile and unpredictable climate we find ourselves in, would improve the world.

And sometimes, the best thing we can do when someone does, is to just be present.

Then, eventually, we can laugh again.

You can watch Patton Oswalt’s new comedy special “Annihilation” on Netflix right now. And I highly recommend that you do.

One thought on “Annihilation. What Patton Oswalt’s New Comedy Special Teaches Us About Grief.”