What I Remembered That Made Me Love the Bible Again

Ah the Bible. The Christian manual. The how to guide for how to live a Holy life. A list of long, unpronounceable names and instructions and rules and…I’m almost falling asleep thinking about it.

It’s not every inspiring, let’s be honest. Not, that is when the only way we think about the Bible is as a very long and boring instruction manual for Christians without even the helpful pictures that IKEA provide. END_OF_DOCUMENT_TOKEN_TO_BE_REPLACED

Why I am Giving Up Lent for Lent

A couple of months ago we had the obligatory New Year’s Resolution’s Facebook post, Tweets and blog posts and now the Lent ones are trickling in. Stupid “I can’t think of anything to write about so I’ll just write about Lent”, Lent blog posts…

Why as a Christian I disagree with the Conscience Clause.

I am no legal expert. I mean I enjoy watching Law and Order and heck, is there a better court room scene than Jack Nicholson yelling at Tom Cruise in A Few Good Men? So I am very under qualified to comment on the legal ramifications of the Conscience Clause that the DUP have brought forward in light of the Asher’s Bakery case. END_OF_DOCUMENT_TOKEN_TO_BE_REPLACED

Should Women Be Leaders in Church (A totally ironic blogpost)

As I write this I am listening to a debate on the radio show about the issue of creating babies using the DNA from three parents. The debate is between two women, one who thinks it can be a good thing and one who doesn’t. Both coming from very different sides of the argument. As I listen I am struck by the tone of their voices. It sounds really weird and I don’t really understand what is happening.

Both women are speaking calmly, clearly and this is the part I don’t get, aren’t speaking over each other. They clearly haven’t been schooled properly on the art of debating. One of the women even had the audacity to highlight parts of the issue where they agreed with each other. Is she crazy?! If she doesn’t tread carefully then this could quickly digress into a civilized, informed and graceful conversation on a delicate topic.

They should have been listening to a debate I heard yesterday when two men were on discussing another topical news story. If the women had tuned in then they could have saved themselves the horrible outcome of really listening and learning something from someone who holds a different viewpoint to theirs.

That was a proper debate because I didn’t really understand where both sides stood because they were shouting over each other so much which was good because as a man the noise allowed me to sit confidently in the my own smugness.

And besides everyone knows that whoever shouts louder is right.

Or take last week when at the Consecration of the Rev. Libby Lane, as the first female Bishop in the Church of England, some bloke who reads the Bible, because he said he did, shouted his objection to what was happening. Then from what I can tell happened, realized that this wasn’t the “Biblical mandate for the requirement of Pastors to preach while jumping up and down on a bouncy castle blindfolded” meeting that he assumed it was, leaving his “not in the Bible” heckle slightly awkward as he shuttled off. 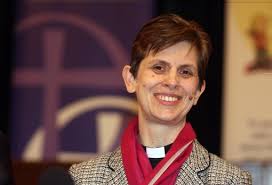 And I’m sure that even that’s got to be in Leviticus somewhere.

But at least he made a scene of himself, unlike the Rev. Libby Lane who just stood there, all dignified and deferential. How dare she? Didn’t she know that the whole world was watching? How could any of us take her seriously as a Bishop if she didn’t at least yell back to the man, “I know I am, but what are you?!’

Which wouldn’t have made any sense whatsoever, and so would have been a perfect start.

But even if there are some logical reasons why women should be allowed to be the main Pastor or Bishops in the church, those aren’t important because even though us men are clearly more logical, the Bible says you can’t do it which means that you don’t need to think logically anymore. Which if you think logically enough, is so illogical that it becomes logical again.

And yeah I mean sure, the Old Testament says we should keep slaves and stone women, things  that we have clearly moved on from in the church; but you know we need to read the Bible in context and we have the New Testament now. Instead of women trying to get into positions of leadership within the church they should just be grateful we aren’t stoning them every five minutes. Where’s the gratitude eh?

Now I know that there are a lot of men Pastors who have failed on a huge public platform, but that’s only because you can’t sympathize with someone unless you go where they go. One reason for why women can’t be leaders in the church is because they get far too emotional and wouldn’t be well suited to the high pressure situations that many male Pastors face, like how much to tip a prostitute or how to keep someone who was spiritually abused by men in the church quiet.

If you think women should lead in the church you may well point me to examples of men who couldn’t be trusted to be Christian leaders, like some of the really Holy Biblical men in the Bible who God chose to lead. Men like King David, who was so Holy and kind that He had his pal Uriah murdered, but even that was only because he wanted to save Him the embarrassment of finding out that he had been sleeping with his wife. That’s compassion.

Or the fact that the first person to proclaim the Gospel was not a man, but actually a woman.

But when you think about it clearly and logically like a man would, that was only because Mary Magdelene was going to the tomb to give it a good clean.

No, if you ask me, women should know where their roles are in the church and let us men do what we do best and lead.

After all, we’ve made such a fine job of it so far.

Why Christians should be a lot more like Stephen Fry

By now I am sure you have seen the Stephen Fry video where we was interviewed on Irish tv by Gay Byrne. In particular, the segment where we was asked about God and he revealed his deep hatred for a god who could let such horrible things as bone cancer in children or worms that eat through eyes, exist in the world.

I read a lot of responses to the video from Christians and there are a few things that stood out for me. In some cases, how alarmingly little grace there was shown towards Stephen Fry and in some really encouraging responses of understanding and thoughtfulness. END_OF_DOCUMENT_TOKEN_TO_BE_REPLACED