Why Christians should embrace Horror movies.

For as long as I can remember I’ve been a fan of Horror movies.

I’m not sure where it originates from but I do remember seeing the trailer for Psycho 2 when I was 8 or 9 and being immediately intrigued and scared.

I remember coming out of the movie theater around the same age and seeing a poster for one of the Childs Play Movies.

I remember my friend Stephen’s friend Daniel, who told me both his parents gave him 5 quid for pocket money each week carrying a Freddie poster around to my house for some strange reason.

Or going shopping in Stewarts with my gran on Friday mornings during the Summer Holidays and exploring all the video covers while she paid for her groceries. Picking up titles like Maniac Cop and Phantasm, seduced by their covers and intently reading their descriptions knowing there was not a chance in Hell my mum would let me watch them.

I remember the most scared I had been as a kid watching Ghostwatch on BBC 1 one Halloween night; the 11 year old me convinced by familiar Children’s TV personality Sarah Greene, that I was watching something real and live.

I remember all of this and more and I loved how it felt.

I also remember as long as I’ve been remembering things, going to Church.

It was just a part of our lives that was always there and I’m so grateful my mum instilled this openness to God and Jesus in our lives. I know that at times it felt like the biggest pain but as I’ve grown up and explored what my Christian faith looks like and how it has transformed, I know that it was because of this foundation that was set for me.

Perhaps because both Church and Horror have seemingly been a major part of my life since I was a kid; I’ve never seen either as being incompatible.

Reading through the Bible it is very apparent that darkness and evil are everywhere. Even stories that as kids we sang songs about like Noah and the Ark, are inherently Horrific tales.

If the traditional Evangelical Hellraiser-esque depictions of Hell aren’t the very essence of horror, I’m not sure what is.

Even as I’ve grown up and explored more mystic versions of Christianity and embraced practices such as meditation, people have warned me about letting something demonic in.

Fear is far more common than we think.

So there is no better genre to help us as Christians explore our faith honestly and openly than Horror.

It’s not just movies like the Exorcist or the Omen which have explored the relationship between good and evil, God and the Devil, but more recent movies have explored issues that everyone struggles to deal with. 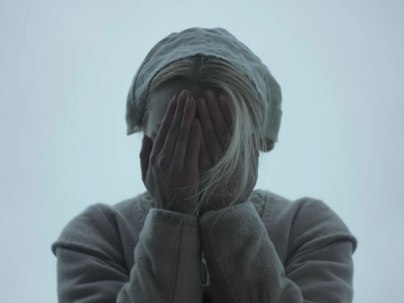 Movies like It Follows delve into the struggles between sex and growing up or the Australian Horror, The Babadook which explores what happens when we don’t express our grief and pain in a real way. Or my favorite movie of the last couple of years, The Witch. A movie that has much to speak into  how Fundamentalism, the dangers of arrogance in belief, and how life without a community to explore our faith, can result in bad things happening.

Or if that is too much for you, how goats don’t make suitable pets.

These are intelligent movies that don’t rely on cheap scares to simply entertain but rather are clever and stylish pieces of art that help us find something bigger than ourselves in their portrayals of issues that Christians have struggled to grapple with.

Movie makers like Scott Derrickson, a Christian, have used Horror to explore the dark recesses of our minds in movies like “The Exorcism of Emily Rose”, “Sinister” and “Hellraiser: Inferno”.

So why do Christians have such a hard time embracing the horror genre?

I think one reason is that good horror is honest. It doesn’t pretend that everything is alright and it doesn’t just give us easy answers to life’s deepest questions. Derrickson himself put it astutely when he said,

“Christ, in His moment on the cross where He endured the ultimate horror, gives us God’s mindset. He is not detached from suffering.”

Somehow though, we’ve become detached from suffering and don’t know how to face up to our fears, doubts and questions. We gloss over them until they are unrecognizable; but they still exist, controlling us without us even noticing.

Our greatest fear maybe, is that if we go too far down the rabbit hole of where our pain resides we’ll never come back. Carl Jung the Philosopher and all round smart guy talks about the Shadow. The Shadow is the part of us whose existence we don’t like to acknowledge but in which resides healing and ultimately the light. Turning towards our Shadow as described by Phil Stutz and Barry Michels in their great book “The Tools” ultimately allows us to reconnect with our pain and suffering, bringing us back into the light.

If we can embrace that evil is real, not to justify it, but to heal it, we’ll find new types of freedom.

This is why Horror is so crucial to Christians. It gives us permission to face our fears.

We talk a lot about unconditional love in Christian circles but we don’t really believe it. It sounds nice and it gives us a get out of Hell free ticket but day to day we work tirelessly to suppress everything about ourselves that we feel people will reject. Ultimately, what we reject in others is what we’re too afraid to see in ourselves.

Others were so afraid of their beliefs crumbling before them that they would rather have continued as an addict than finding beliefs that actually worked.

What causes us to stay in these places? What makes someone desire the prison they are in more than having their beliefs challenged?

I believe it is fear. Fear of death. But if we’re not free, we’re already dead.

Darkness is essentially the absence of light. The existence of darkness is wholly dependent on the light. It bows down to the light. But for the light to have any authority we need to acknowledge that there is darkness.

A healthy spirituality and faith is one that points to something bigger than itself. Good horror too, isn’t about the imagery or the story so much as what it says about our deepest fears and where the light can shine in.

Horror and faith it seems then, have more in common than we would like to admit.