3 Creative ideas for how to react to Katie Hopkins

Katie Hopkins. The name might mean something to you or it might not. You might have heard the name but not able to place the face. Either way, it’s likely that you’ve heard someone talk about her in work or complain about her recent horrible article in the Sun.

If you really want to read it, google it.

It’s the just latest in a series of comments from Katie that have offended thousands of people over the years. And I don’t blame them. Most of what Katie says or writes is inaccurate, hostile and just simply rude.

And she seems to thrive on it. She loves the attention when we get up in arms about her latest attack on some section of society. Maybe you’ve signed the petition, to ask that the Sun drop her as a columnist. But I wonder, if all it might achieve is to give her more fuel?

We already know that she enjoys playing the pantomime villain, so is the fact that 300’000 people have demanded her removal from the Sun’s payroll going to effect her? Are we really relying on the Sun to sack her?

The Sun people. The Sun.

It would be so easy and so tempting to just return fire with fire. There have been some insightful articles written on Katie in the recent days but there has equally been a lot of hate driven back to her on social media. The distance and anonymity that Social media often provides allows us to say things to others that we wouldn’t say to their face. It means we have direct access to celebrities in a way that has never existed before. We can tell them exactly what we think of them.

But what does this achieve exactly? Even if they even bother to read through the hundreds of responses that people like Katie may receive, do our responses help her to see the light or do they simply further validate her beliefs in her mind?

My guess is the latter.

There has to be a better way surely to react to people like Katie Hopkins. Because if simply returning hate back towards her had any effect then she would have realized how wrong much of what she says is. But most of us when attacked, will attack back. It’s human nature.

Regardless of the types of things Katie writes, she is still human and I have to believe that there is still some part of her that is capable of love and caring and compassion. There just has to be.

It’s a classic case of bullying. A bully doesn’t bully because they are stronger than the other kids. They bully because they have a deep, somewhat unconscious pain that they are carrying around with them. Perhaps they have been bullied themselves, by an adult or a friend. This can cause deep shame and ultimately could cause them to in turn try to combat that shame about their very core, by bringing someone else down.

It’s much easier to attack the vulnerable or “weak” than it is to deal with our own vulnerability and weakness. (Tweet this)

But we all carry these things with us. Some of us have learned to not be afraid of it and have dealt with it in a way that has freed us to love others rather than to shout hatred. Others, like Katie Holmes, haven’t. But we can help them.

People like Katie Hopkins need to have love shown to them, because that is what causes this reaction in her and others. A lack of love for herself. We just need to show her how.

This is an extremely counter intuitive way of thinking about our enemies. About those who are wrong and about those who cause harm and pain to others through their words and actions.

So here are three examples where this type of response has been employed. Three examples of this counter intuitive disobedience to the norms of how we’re “meant” respond in action.

And where better to start than with Katie herself.

Russell isn’t exempt from his own fair share of hatred online from the public but the way in which he responds is a beautiful reminder of how much Love can nullify attacks against us. What I love about Russell’s tweet to Katie is that he hasn’t given up on her. It would be easy to write her off as so many people have but He simply reminds Katie of her responsibility to humanity.

A responsibility to be slow to judge, to be compassionate and above all else love others. Not just this but He acknowledges how tiresome it is when we drift away from this type of connection with our fellow humans. Because, really he’s right. Katie must be knackered having to be so hateful all the time. Come back to us Katie, Russell pleads. Life is more free over here where Love is the most important thing.

And above all else, Russell understands why Katie is like how she is. Her disconnection from other people is caused by a deep disconnection within herself. None of us can truly love ourselves unless we are completely at peace with who we are and our place in this world. Plus, it’s terribly difficult to muster hatred for others when we are at peace with ourselves. It’s actually pretty impossible I think.

Russell knows this better than most. A former addict, he gets that when the pain that we leave unchallenged is allowed to grow, it just grows horns until it rips through us revealing the devil inside each of us.

Continuous, overwhelming, “wearing them down with love” is one way that we should respond to Katie. Showing her that her hatred is not acceptable in a way which resists the temptation to throw her words back at her will eventually prove too much for her to bear. Love like this can crack any cold heart. Even Katie Hopkins. Which leads nicely to another great example of how we should react to Katie. 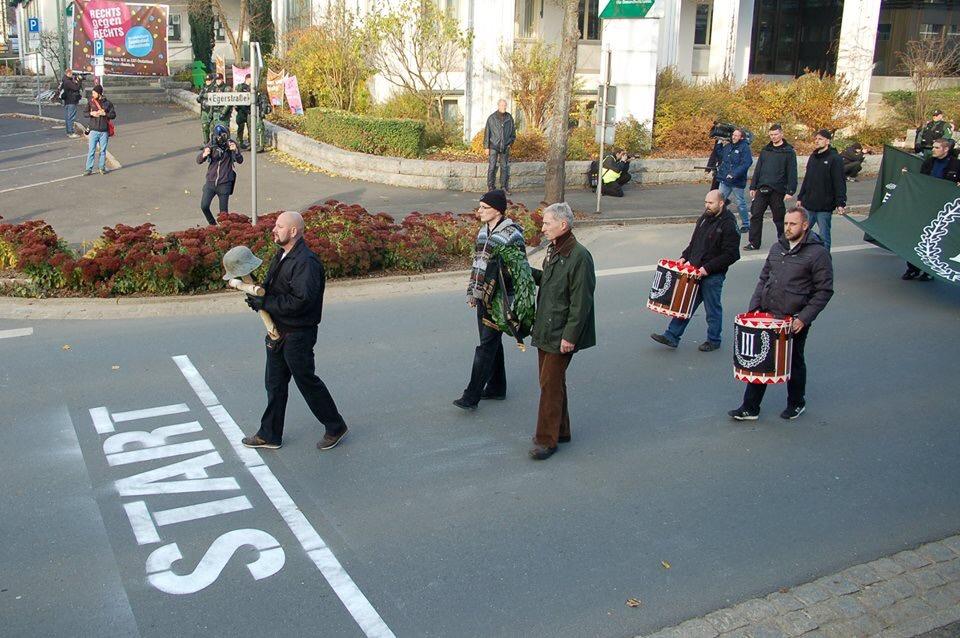 For many the example of relentlessly showing Love to someone who needs it like Katie, feels a little light. It’s almost like we are covering over the damage that can be caused by people when they spread hate. Which is why this recent idea from a German village which was being overtaken by a fascist Nazi parade is ingenious. Instead of simply closing the town down or refusing entrance to the Nazi’s, the village decided to take a completely different and creative approach.

They decided to turn the hatred from the marchers not back onto themselves, but into something that displayed a better message of hope and Love. But not just that, forcing the marchers to unwittingly through their act of hate, raise money for anti fascist charities.

What’s amazing about this approach is that instead of turning angrily against the marchers, the village decided to allow them an opportunity to experience what it’s like to let go of their hate by parading for something good. The village was portraying a message that everyone is included, even Nazi’s. Not simply through words, but through the paraders unwittingly active participation in raising such a message.

The group were practically doing good for a cause they would be completely against. This is the epitome of what turning the other cheek can look like for us today.

When it comes to people like Katie, it would be very easy to try and block her views from being her heard. Maybe that still is a good idea. What is a better idea though is to take her views and turn them upside down in a way in which she ends up practically contributing to good every time she is rude, racist or snobbish. Maybe we could donate money to a charity in her name for every time she appears in the media. (You’ll need deep pockets).

We can easily sit by and not say anything and we can easily sit on our computers and angrily tweet her back. What takes something special though is calling her out, turning her words into something good and showing her who she really could be. 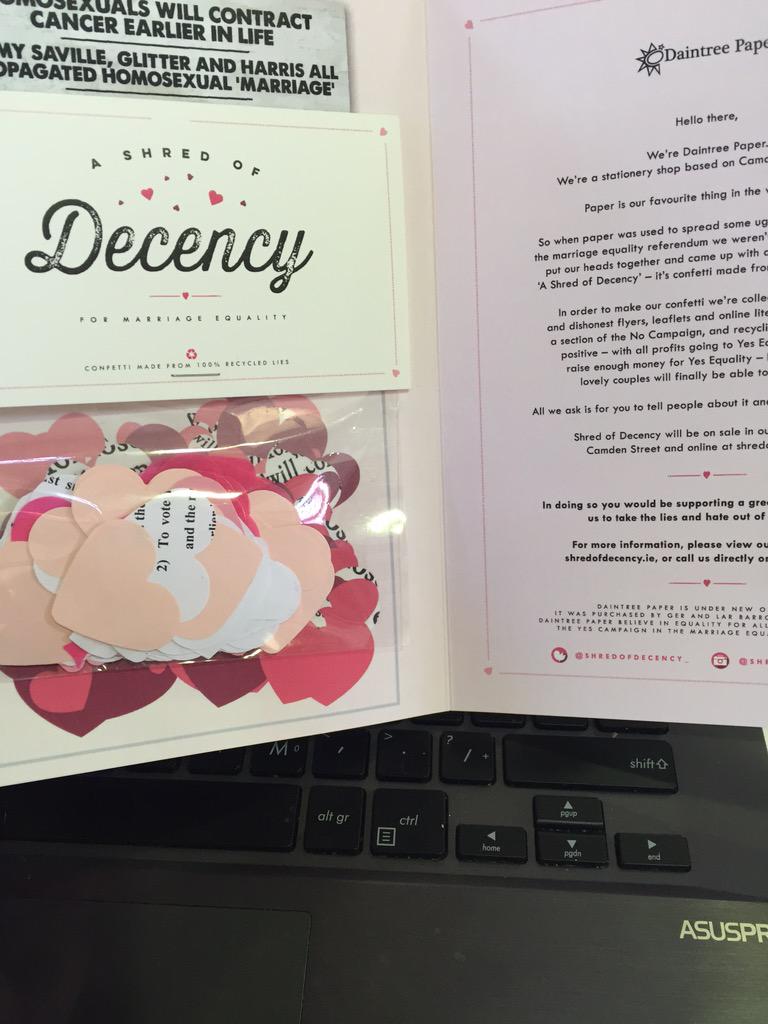 But what about the people that Katie directly attacks. How can they respond? Well maybe they can learn something from this incredible campaign from Ireland, where anti gay, homophobic leaflets were turned into confetti for gay weddings.

This is an incredibly simple idea that totally nullifys hatred.

Take the very words that are used against you and without removing or ignoring them, turn them into something that is the complete opposite of what they were intended for. Katie’s main vehicle is through her words. Her shockingly ignorant opinions and ideas. Instead of banning them use them to spread a message that gives others hope rather than kicks them down.

Ideas like creating a mash up of all her appearances on tv and turning them into a more hopeful message of Love and Peace.

Her words are being spoken, they aren’t being denied, but we refuse to let them bring us down.

The one thing these ideas all have in common is Love. A Love which characterizes itself not in how it returns hate for hate, but how it recycles it into Love. Ultimately for someone like Katie, hatred is something that consumes her life. In how she talks about people but probably most of all how she feels about herself.

What can set her free is when we refuse to simply ignore what she says but use it show her the light. The light that illuminates how we are all connected, how we’re all more similar than we assume and which shows us where we are lacking in Peace.

Because this is not just about Katie. This is about all of us. And it starts with allowing ourselves to be loved. Because where there is an absence of love for ourselves, only hatred and suspicion will grow towards others.

Allow yourself to be loved.

And yes Katie Olivia Hopkins, that includes you.