How NOT to disagree with Jamie Bryson.

If you follow politics in Northern Ireland and are on twitter you will most likely have heard of Jamie Bryson. Jamie is a Loyalist activist who was an early member of the Protestant Coalition and a leading light in the Flag Protests that began in December 2012 after the Belfast City Council voted to only fly the Union Flag on designated days and not all year round, which until that point it had.

Jamie is like marmite. For most people there is no middle ground with him. You either are on board with everything he says or you disagree profusely. Either you think he is the future of Loyalism or you think he is living in the past and is causing great damage.

I disagree with pretty much everything he says. I think he is often unfair in his judgements on people and can sometimes sound paranoid. I think he has a tendency to stir things when they don’t need to be and I believe his politics hark back to the dark ages before Sinn Fein were a legitimate and peaceful political party.

Jamie is very active on twitter and posts regularly everyday. When speaking and writing he is elegant in his wording and he is clearly intelligent. He has the potential I believe to leave a great legacy for Northern Ireland. 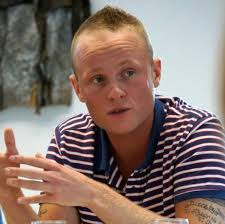 If you follow him on twitter you will more likely see that many of the responses he receives to his tweets are negative. That negativity however, is usually directed at Jamie himself rather than his ideas. Attacks on him as a person rather than deconstructions of his views.

This I believe is a huge mistake for those who disagree with him and we can learn a great deal for how NOT to interact with those we disagree with by reading a selection of the “kind” responses he receives.

When we attack someone personally we only prove to alienate our voice from the conversation, not the person we disagree with. Jamie and I and everyone really, are less likely to want to engage with you when you don’t offer anything substantial or useful.

In the past I have been guilty I am sure of using the same tactic that most of Jamie’s detractors use. But this does not get us anywhere. When engaging with someone we disagree with, no matter how fundamentally, our job is to use reason to show the flaws and sometimes inaccuracies in the ideas.

In doing so, we show the other person or group that we are not in the business of personal attacks. Maybe then it is safe for them to engage back. I have tried recently to engage with Jamie on twitter. I have countered those arguments he uses that I believe are wrong or dangerous. To this point Jamie hasn’t responded back which frankly I am not surprised at because my replies are most likely being lost among the rest of the hate and vile directed to him.

The internet allows us to remain somewhat anonymous. Even if we tweet from our own accounts and not under a pseudonym we won’t have to engage with someone face to face. This may be what gives us the confidence to be rude and hurtful in how we speak.

Why listen to someone when they are being rude to us? What does it benefit us? Nothing, and this in turn means it doesn’t reap beneficial discourse which ultimately doesn’t benefit the community.

In the case of people like Jamie, when they are constantly attacked this has the adverse effect of turning them off engagement with opinions that differ from their own. And who could honestly blame them?

So to Jamie I want to say, yes there are those who will attack you and vilify you making you out to be uneducated. Don’t confuse those who disagree with you, not matter how strongly with those who have nothing useful or helpful to contribute. There are also those of us who understand that just because someone has an opinion that is different or even which we believe harmful, this does not equate to you being someone who deserves scorn. I may disagree with you but this does not have to mean we can’t engage with each other. When we listen to each other and when we strip away the preconceived prejudice there is just because of who is speaking, we can start to make real progress in Northern Ireland.

Of course there is also that real unspoken fear that maybe if we listened to those we bump up against our own views may be challenged and we may see something in ourselves that might require change. Changing the view of someone else is next to impossible but changing our own is even more difficult. So maybe the point isn’t that I try and change the ideas of people like Jamie Bryce but simply that I offer an alternative way of speaking to him that is maybe foreign to their experiences on twitter.

Engaging with each other with peace and grace is not complicated. That doesn’t mean it will be easy of course. But violence, wether physical or with words has never benefited Northern Ireland.

And I can’t see it starting now.