Are you serious? Christian April Fools? Telling an April Fool is paramount to lying and lying is clearly a sin. Also calling someone a fool is the worst sin out there. Don’t believe me? Then check out Matthew 5 v 22. It’s right there. So basically April Fools is just a sinners paradise. You can condemn yourself to Hell for all eternity, break one of the most important 10 commandments, and all before lunch.

On the other hand, it can also be really, really funny.

So with that in mind hear are a few ideas for how to enjoy April Fools without becoming a heretic.

1. Really want to mess with your rapture believing friends? Predict the end of the world soon, tell them you are throwing a party to celebrate and invite them round with seemingly careless piled mounds of clothes and shoes lying around your house with half drunk glasses and half eaten party food strewn across the room. While watching from nearby as the despair and hopelessness when they think they’re not really saved appears on their face. 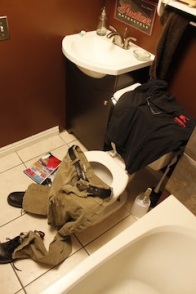 2. Pretend that your Christian org is going to change their employment policy for a day then release a statement reversing the decision. I promise you, everyone will think it is hilarious.

3. Watch your conservative friends explode with anger as you tell them you think Rob Bell is more theologically sound than John Piper and that you’re not even sure Adam and Eve really existed. For extra points throw in a “There’s more than one way to Heaven than Jesus” if you’re feeling brave.

4. Try to keep a straight face as you announce to your more Liberal friends that you are boycotting NOAH because it doesn’t say anywhere in Genesis that NOAH had an Australian accent and super ninja skills. Then invite them around for a Kirk Cameron Left Behind/Fireproof marathon instead. (#4 can be used in conjunction with #1 for added hilarity)

5. Or yeah sure, you could just ask everyone who tries to pull a prank on you, WWJD? That would be fun and ensure many future invites to hang out.

Hope this helps you out a little today. Enjoy. Be creative.

Just don’t call anyone a fool.